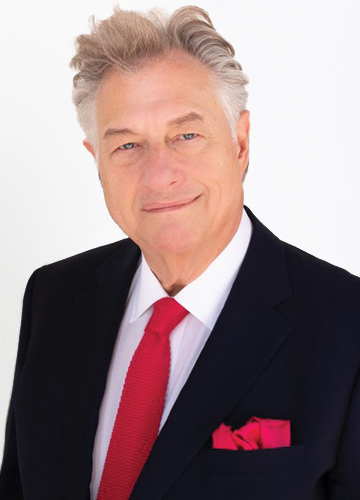 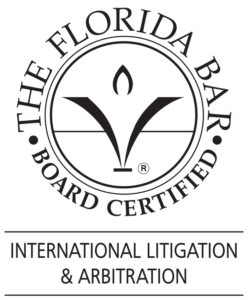 Hendrik G. Milne is a top international advocate with over 40 years of experience in courts and arbitrations around the world. He is an English barrister and a Florida attorney, admitted to the bar of multiple federal courts across the U.S.A., including the U.S. Supreme Court, and has dozens of reported cases to his credit, many of them creating new law. He is Board-Certified by the Florida Bar in International Litigation and Arbitration and peer-reviewed as “AV” by the USA’s premier rating organization, Martindale-Hubbel, denoting the highest possible level of skill and ethics.

Hendrik (“Henk”) Milne was born in Calcutta, India, in 1953. He attended Queen Elizabeth’s School in North London, England through “A” and “S” levels, and gained his first law degree, a Bachelor of Laws, with honors, from the University of Manchester in 1975. After further legal studies at The College of Law, London, he was admitted to practice as a Barrister of England and Wales in 1977, completing his pupillage in Lincoln’s Inn (taxation and trusts) and The Middle Temple (torts and crime), of which he is a member.

During law school in Miami, and after admission to the Florida Bar in 1981, Mr. Milne learned American jury trial techniques at one of Miami’s premier litigation boutiques, Anderson & Moss. In 1983, he joined the Miami office of the international law firm of Squire, Sanders & Dempsey (now Squire Patton Boggs) where his practice focused on complex commercial, and particularly international, litigation. In 1990, Mr. Milne became a partner in the firm and thereafter head of Squire’s International Litigation & Arbitration Section, worldwide.

Mr. Milne’s particular focus is on advocacy in an extremely wide range of substantive legal areas, with a heavy emphasis on multi-state (intra-U.S.A.) and international disputes. Over his career he has arbitrated matters, tried cases to judges and juries, and briefed and argued appeals in many state and federal courts and tribunals across the United States, and abroad. He has strong academic skills and is a very quick study.

Hendrik G. Milne routinely works with lawyers from all over the world in disputes involving the laws of multiple jurisdictions, often supervising parallel or complementary proceedings taking place in multiple countries, simultaneously. He speaks and reads French, German, Dutch and Spanish with varying levels of proficiency, and has been retained as an expert witness on English law in American proceedings and on American laws in connection with proceedings in the U.K. In common with his partners, Mr. Milne has earned Martindale-Hubbell’s highest rating for his professional skills and his ethics: “AV.”

Zublin/Forsyth/Totalbank Litigation 2008-2013
AMK’s clients were Chilean and Peruvian affiliates in a German construction and mining conglomerate. Suit was filed against Peruvian outside general counsel and various company executives, alleging that they had, together, embezzled some $11 million from company accounts in Peru and routed the funds through a defendant Miami bank, to accounts in various secrecy jurisdictions in the Caribbean and Europe. Most of the funds stolen were frozen through Mareva injunctions and eventually recovered in various countries through the efforts of AMK’s co-counsel. After initial discovery, AMK prevailed at the trial court and on appeal in preventing severance of the Florida civil theft, treble damage claims, as against the Miami defendants and the foreign defendants, and prevented the dismissal of claims against the foreign defendants in favor of the Peruvian forum. Legal issues turned on the laws of Florida, the U.S., Chile and Peru. See, Solari v. Zublin Chile Ingenieria y Construcciones, 987 So. 2d 161 (Fla. 3d DCA 2008).

Inverpan Litigation 2007-2009
AMK’s clients were individuals resident in Aruba who were alleged to have defrauded opposing parties in Aruba of $11 million in Miami bank accounts by undue influence. After jurisdictional discovery in Aruba, AMK established that Miami was an inconvenient forum for the litigation and secured a dismissal of the proceedings in favor of the Aruban forum. No further proceedings were filed in Aruba. Legal issues turned on the laws of the U.S., Florida, Panama, Aruba, and Venezuela. See, Inverpan, S.A. v. Britten, 646 F. Supp. 2d 1354 (S.D. Fla. 2009).

Nemesis Veritas Litigation 1998-2002
AMK client, Bill Toto, a successful, retired, Ohio businessman, was sued for $90 million for alleged tortious interference with contractual relations. After several years of bitter litigation, with discovery in Florida, New York, Massachusetts, Virginia, and California, Mr. Milne won the case on a renewed summary judgment at a hearing immediately before he was due to pick a jury for a federal trial in Palm Beach. The District Court awarded AMK’s client fees under the Florida offer of judgment rule. The U.S. 11th  Circuit Court of Appeals affirmed on the denial of liability but reversed the fees award, and then on an emergency petition in light of new Florida Supreme Court authority, re-instated the fee award. Legal issues turned on the laws of Florida, the U.S., Virginia, New York and Massachusetts. See, McMahan v. Toto, 256 F.3d 1120, 1130-35 (11th Cir. 2001). McMahan v. Toto, 311 F.3d 1077 (11th Cir. 2002).

Triton v. CAVN 1994 – 1996
AMK client, Triton Container International, arrested the “Cerro Bolivar,” the flagship vessel of CAVN, the Venezuelan merchant marine, in Guam, en route to Venezuela, where it was to be sold in bankruptcy to satisfy creditors. The vessel was sold at auction and the proceeds escrowed in the bankruptcy court in Miami pending trial over the issue of whether the funds should be remitted to Venezuela for foreign bankruptcy administration – where Triton would have shared ratably with all creditors, for cents on the dollar – or whether Triton had a prior lien on the vessel and was entitled to be paid first, in full, ahead of all other creditors. During the Miami proceedings, AMK also arrested the CAVN headquarters in Miami under a federal maritime arrest warrant, minutes ahead of their being mortgaged. The Venezuelan government eventually conceded the case on first morning of trial, rather than publicly try the issue of fairness of the foreign proceedings, and the total proceeds were divided between Triton and other prime lienors, through settlement on confidential terms. Legal issues turned on the laws of the U.S. and Venezuela. See, In Re. Saleh, 175 B.R. 422 (Bankr. S.D. Fla. 1994).

Beydoun v. Cardoen/Swissco Global Litigation 1990 – 1995
Mr. Milne and Craig Kalil represented Nasser Beydoun, an international arms broker, in a suit for $30 million in unpaid commissions on the sale of $467 million of cluster bombs from Industrias Cardoen, Ltda. in Chile, to Saddam Hussein’s government in Iraq. After settlement talks in Chile proved unavailing, AMK further counseled Mr. Beydoun, who had himself broken no laws, in the negotiation of an assistance agreement with the U.S. Treasury Department under U.S. moiety laws. Mr. Beydoun provided the U.S. government with information that bomb-making machinery was being re-tooled in Miami as washing machine parts; that zirconium, the incendiary component in the bombs, was being shipped by the defense contractor, Teledyne, from the U.S. to Chile, falsely designated as mining supplies; and helped the U.S. trace many tens of millions of dollars in profits from cluster bomb sales into Miami real estate investments.

The government indicted the principal of the Chilean bomb-maker, Carlos Cardoen, prosecuted the Teledyne executives involved, with the assistance of Mr. Beydoun’s testimony, and made the largest seizure of land under the forfeiture laws ($30 million) then to date. The U.S. paid Mr. Beydoun a multi-million dollar sum for his assistance under the U.S. moiety law, but he was sadly murdered shortly thereafter, execution style, by persons unknown, in Brazil, in 1995. See, U.S. v. Cardoen, et al., 898 F. Supp. 1563 (S.D. Fla. 1995).
http://law.justia.com/cases/federal/district-courts/FSupp/898/1563/1464466/; http://www.nytimes.com/1993/05/27/us/teledyne-and-chilean-indicted-in-iraq-bomb-sales.html;
http://www.newsweek.com/chile-miami-miami-baghdad-202224;
http://www.sfgate.com/magazine/article/THE-CHILEAN-CONNECTION-Carlos-Cardoen-arms-2667085.php

Hawaiian U.S. v. All Monies Cases 1989-1993
Mr. Milne represented a group of Peruvian businessmen on “innocent ownership” claims in the six largest forfeiture cases resulting from one of the federal government’s earliest “sting” operation against money-launderers. These and many other cases were filed in the U.S. District Court in Honolulu, Hawaii. The cases involved bank accounts implicated in drug-money laundering through the currency exchanges in the parallel markets of Peru.

Windward Traders Litigation 1985-1988
An individual under criminal investigation in the U.S., allegedly converted assets into cash and bought a commercial vessel which he sent across the Atlantic, intending to turn it back into cash, on its arrival. However, it sank at anchor off Portugal and all insurers denied coverage. The ship owner sued all tiers of coverage plus the broker for the London underwriters, Kininmonth, on the theory that it was liable as an agent for undisclosed principals. After discovery in England, Mr. Milne won judgment for Kininmonth at trial in the federal court in Miami, which was affirmed on appeal. Legal issues turned on the laws of Florida, the U.S., and England. Windward Traders, Ltd. v. Fred S. James & Co., 855 F.2d 814 (11th Cir. 1988).

Wrisco/Hinely Litigation, Atlanta, Georgia 1988-1991
Managers of the Atlanta, Georgia, branch of Wrisco Industries, a major aluminum distributor, set up a competing business with material stolen from Wrisco. A civil suit was filed against the ex-management in the federal court in Atlanta for breach of contract, breach of fiduciary duty, conversion, conspiracy, wrongful appropriation of trade secrets, and tortious interference. Alongside the civil action, Mr. Milne filed a criminal complaint with the State prosecutor and testified before a Georgia grand jury, summarizing the collected evidence of theft, which resulted in criminal indictments against ex-management.

The opposition attempt to disqualify Mr. Milne as counsel, and secure access to the grand jury evidence, failed. The U.S. District judge held that Mr. Milne had not become, as argued, a “material witness,” and therefore unable to act further as counsel. The court further held that there had been no waiver of any privilege by Mr. Milne’s grand jury testimony, in that the work-product privilege, protecting against disclosure of evidence in civil suits, dovetailed into the grand jury privilege, protecting against disclosure of evidence laid before the grand jury in criminal cases. Legal issues turned on the laws of the U.S. and Georgia. See, Wrisco Industries, Inc. v. Hinely, 733 F. Supp. 106 (D. Ga. 1990).

Mr. Milne is married with two sons and has a wide range of interests, including traditional wooden boat-building and sail-making, reading history and linguistics, learning foreign languages, writing and playing folk and rock music, and writing music history. He has published numerous articles on Latin American wines as the wine critic for the Euromoney publication, Latin Finance Magazine. As the songwriter and front-man of the Celtic rock band, The Three Jacks, Mr. Milne has performed at numerous large concert venues in Florida, Nicaragua and Peru, to raise funds for medical, educational, and children’s charities, and has several CDs of music out on itunes.com. He is a board member of The Learning Experience School, a school for children with mild to moderate learning disabilities (www.thelearningexperience school.org).

AMK is a member of the International Fraud Group (IFG), an alliance of over 40 law firms with a presence in over 50 countries, formed to combat cross-border fraud and recover stolen assets from jurisdictions around the world.